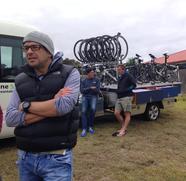 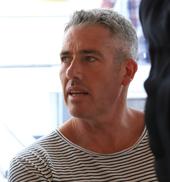 Mark Powell has been a registered mental health nurse for over 20 years, and is currently employed by St John of God hospital to work in partnership with headspace Warrnambool. Prior to that, he worked for many years in the area of mental health and substance use in the public mental health system. He particularly enjoys the work at headspace, as it provides an opportunity to engage with young people. Early intervention can assist with issues impacting on mental health and often avert a major psychiatric issue. The value of early intervention is well documented and headspace provides such an opportunity to young people at a time when they are most vulnerable to the onset of mental illness. Mark has seen first-hand, how people can be helped by mental health treatment and, sadly, has heard of people who have not had access to help early enough, leading to often tragic outcomes. Mark believes very strongly in the work of headspace and welcomes this opportunity to participate in this ride to promote headspace and the crucial role good physical health plays in good mental health.

Derek Borg loves cake (often cunningly disguised as banana bread) and ice cream and hence feels compelled to do one of these rides ever 2-3 years to try and bring his weight back into line. Apart from the selfish reasons for doing this ride, he has two amazing children (Madeleine, 22 and Lachlan, 19), who fall into the age bracket of people who headspace is there to assist. He is very grateful, that so far in their lives, they haven’t needed to draw on that help. He hopes that through greater awareness of the services headspace provides, and some well-applied fundraising, the Cycle4Life team can make a small difference. He chose these dates for the ride, so he can make sure he’s back in time to watch the Tiges play in the AFL grand-final. Go Tiges!

Jason Hill is not sure what it is about physical challenges that attract him. Perhaps it is his way of marvelling at what the human body is capable of, or achieving things that may at first seem unachievable. Having done marathons, adventure races, ironman & bike rides from Sydney to Melbourne to Adelaide, he is excited about the prospect of joining some inspiring gents on this epic journey. He believes mental health issues are endemic and sees this as a very worthy and underrepresented cause. Oh, and he’s from Warrnambool Victoria, so riding into sunny Queensland sounds inviting too!

​Frank Malloy is a Director in Catholic Education for Marist Schools Australia. He is married with three young adult children. With over 30 years’ experience working with young people in schools, he is acutely aware of the debilitating effects of mental illness for an individual and their family. A cycling enthusiast, cricket tragic and lover of Rugby League, Frank is proud to boast never having viewed a full game of AFL. Role models include Jorge Bergoglio, Tom Raudonikis and Peter Best. Frank has completed a number of epic rides and this will retrace tracks made in 1983 when he rode from Sydney to Brisbane. He is currently completing a Doctoral Thesis on the spellbinding use of NAPLAN data in Catholic Schools. Suggest you don’t ask him about it, unless you’re seeking a cure for insomnia.

John Palamara is not a bike rider. He prefers the safety of four wheels. Although, if you’ve seen him drive, you would probably see the humour in that. John is married with 4 kids, which takes up most of his spare time. According to him, not too much time for quiet walks on the beach. A season campaigner, having driven the support vehicle twice before on these rides, he says the fun and experience of supporting these crazy riders gives him a real buzz. He is looking forward to again supporting a fantastic cause.​

Eddie Moore has been pretending to work in the sports industry (getting paid to watch and talk about sport) for 20 years. On the way he has also pretended to be an athlete of some description. Through school he was an average cricketer and rugby player, after knee surgery found triathlons in the 80s - when fluro was king (and queen!!). He completed the Forster Ironman in 1989 and then went on to dubious fame as a Guinness World Record holder as a member of the Social Climbers in hosting the world's Highest dinner party on Mt Huascaran in Peru. Eddie tries to maintain some level of fitness riding with Frank and Derek, competing in ocean swims and annually in the Noosa Triathlon. Eddie is married with two teenage children who agree on one matter - Dad's jokes are crap!

Jon Watson is relatively new to cycling and has only been in the saddle for little over 12 months and is usually more at home in the water doing ocean swims. He thrives on a challenge though, be it physical or mental, so when asked to join the group he was only too happy to sign up. It sounds like an adventure! Working in the hospitality industry has kept Jon in the company with many young adults that tell the tales of the effects that drugs have had on the minds of some of their friends.  Jon knows all too well that it’s easy to count your blessings when you look at some of those in the community around you. Unfortunately you don’t have to look too far to see those that need the services of organisations such as Headspace. Jon hopes that the ride and the lead up to it will assist in increasing the profile of Headspace.

Leigh McCarthy is keen for a challenge and keen to contribute is some small way to helping raise awareness and funds for mental health which I feel at times still has a unwarranted  stigma attached to it. Having been touched personally by mental health issues it is a cause close to my heart. Loves any form of exercise, and when not riding a bike, can usually be found in the ocean. Also determined not to be out done by fellow Warrnamboolians, Jason Hill, Jon Watson and Mark Powell, if they're going to ride 1100km, then so am I. Will be the token Collingwood supporter on the ride.